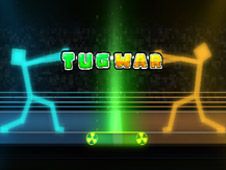 What is Drunken Tug War?

Games with drunken stickmen have been really popular over the years, and if they are also 2 player games online at the same time, then they become even bigger hits, just like it is the case right now with the awesome new game called Drunken Tug War, which is a tug war game where the stickmen move really funny, as they are drunk!

Invite a friend and try to beat them at the drunken tug war game!

Start off by choosing between the 1P and 2P modes of the game, with us recommending the two-player mode more, since it is more fun to play against real players, but if that is not possible, it is still lots of fun to go against the computer. One of you controls the red stickman, the other one the blue stickman, and you use the W and Up arrow keys for that.

Each of you is holding onto a rope, and each of you has your own side of the ring. The goal is to pull the rope so that the other player reaches the middle of the ring, and then falls into yours, and if their health bar is depleted, you win. The first player to win five matches wins the whole game.

We wish both players good luck and lots of fun, and we want to invite you to stick around for the fun still to come since it would be a shame not to keep playing our awesome new games of the day!