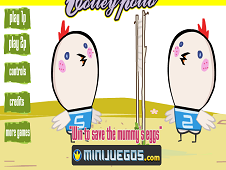 What is Volley Pollo?

Velley Pollo is such a great kind of beach volley game, but this time, you need to know that you won't play with ordinary volleyball players, but with some chicken! The movement is the same so use the arrow keys in order to get the right direction, running backward or forward, as it is required from the situation and use the SPACE bar, in order to hit the ball with their head, because they have no arms, being though some chicken only. However, the balls are not actually some balls, but some eggs to this is why the mission is getting even more serious for the chicken, due to fact that their eggs is everything for them so the one who lose the point, is the one who allows the egg fall in his half of the field, and this way he is not going only to lose the point but lose an egg. You only got 5 lives, so 4 eggs are allowed to fall down in your pitch to avoid failing. Make sure that you will hit the egg, forcing your opponent to make a mistake and fail too, getting the egg broken in his side of the pitch! This way you will win the game and also you'll make your opponent lose every egg, implicit every life he's got! Good luck and play it in 2 players or 1 player, how do you want!