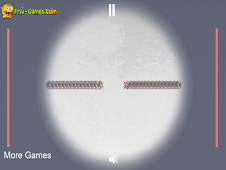 What is Bacteria Fighters ?

Bacteria Fighter is such a great ability and 2 player game, which brings you the opportunity to prove that you are skilled enough, in order to win a real battle, because this isn't a simply fight anymore, but a real battle. The goal is to use either the arrow keys and the A, S, D, W keys in order to move your bacteria in order to stop it from reaching the other place of the game screen. It is so important for you to figure out so quickly the purpose of the game so let's make sure that you won't get beaten up by your opponent, not a single time. it is so important also to keep it up with your opponent, never stopping reaching the other side of the game screen, with the border, where you must get. Never get stuck in any position or posture, because it is going to make you lose. Ask a friend to play this game alongside you because this is the only way you can play it so do it as soon as it is possible. Fight with those bacteria and make sure that you'll either pick the red or the green one, it doesn't matter but you must win!