Reaper of the Undead 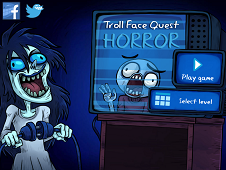 What is Trollface Quest: Horror 1?

Trollface Quest is one of the most exciting series of games, but this time, the game is launching around Halloween, which is why all the action in the game will be more frightening, so don't play if you get scared fast!

As you can see, Trollface Quest: Horror 1 is the first game from Kizi where you will be terrified, because the graphics and sound effects are very real and quite scary, but if you manage to have a good time over the first levels, you will surely be able to complete all the missions. The action of the game is quite simple, it is related to the games of the puzzle type, in which you will have to look for the index that will trigger your activity of the game. We suggest you to pass well all the missions of the game and try to fit in time. You can also use HINTs if you don't know what to do, but for a better experience we invite you to play this game with your friends.