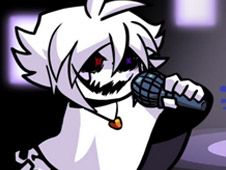 What is Friday Night Funkin': The X Event?

Welcome to Friday Night Funkin': The X Event, one of the best new FNF mods online to be brought over on our website, where right now you will take part in one of the most exciting music and dance battle in this universe, with this game bringing together characters from universes like Undertale Underverse and Xtale, which is why this event is one of the biggest in the series!

Meet the characters you will play with in The X Event:

First of all, we’ve got XChara, a person with white skin who also has white hair, and over his black shirt he wears a long white coat and a golden necklace, while his shorts are black and his shoes are white, creating interesting contrasts in his look. You can see him holding either a knife or a microphone, and he has a condition that makes one of his eyes red and the other one purple. His main theme is called Overwrite, and you will definitely be able to play it in this game!

Coming also from the Underverse we have Ink!Sans, a skeleton with black eyes and white pupils who also wears a brown scarf. He holds a big brush on his back, has a bag of empty bottles that are wrapped around him, wears a skirt as well as brown pants. His main theme is called Inking Mistake, and we’re sure you will really enjoy it!

Take part in the X-Event yourself!

XChara is considered the main antagonist in this mod, with the demo version having released the InkSans character not too long after, and, as usual, you will battle one another with beats and rhythm, using the arrow keys to press them at the correct moment, because if you time them with the symbols and you press the keys when they match, you will play the music correctly and win the rhythm battle!

Be focused to achieve this, and know that you can play the story mode and see where the adventures of these characters take you, or you can check out the Free Play mode and choose songs to play with at random. Good luck either way and a funkin’ time we hope you will have!