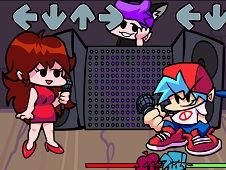 What is Friday Night Funkin VS Girlfriend?

Have you thought about how a VS Girlfriend mode is like? Well, AjTheFunky and GenoX were the creators who thought of creating a Friday Night Funkin way to put the two main characters of this game face to face: Boyfriend vs Girlfriend.

Who is Girlfriend from FNF?

This female character is the girl for whom Boyfriend fights on different musical rhythms so that he can get past all the characters and get to conquer her because he loves her. She is a beautiful girl, with an enviable figure, long brown hair, and as clothing, she has a short one-piece skirt that reaches just below the bottom. She is wearing a pair of red high-heeled shoes that help her dance and have fun in the virtual disco.

In the game you will be able to access only one week on the following songs:

Use the arrows to start dancing with our girl.