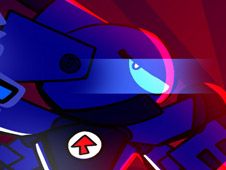 What is Funkin With Nova?

We're happy to be on a roll of bringing you new Friday Night Funkin' Games online on our website today, as we know without a doubt that kids really love playing these games from start to finish, just like we love it too, and the latest one features new characters and new songs, and is called Funkin' With Nova!

Who is Nova from FNF?

Nova is a blue robot that has something like ears on its head, which are more like antennas, to be honest, and she has a symbol of an up arrow on her chest. She crashed the party that Boyfriend, Girlfriend, and his friends had, and challenged him to a rhythm battle, so, do you think you can beat a robot? They're pretty smart! Industrial, Emotionless, and Supernova are the three custom songs featured in this game.

How to play FNF Games online?

This must be what you are asking yourself if this is your first time in this category. This is a rhythm game, meaning that hitting the notes of the song and not missing them is paramount because if you miss too many notes in a row, you lose the game and have to start it again from scratch.

The moment you have to hit notes is when the symbols floating over your characters match, and that is when you press the same arrow on your keyboard, simple as that. Good luck to you all, we hope you defeat the Nova robot, and then keep on playing our new games of the day!