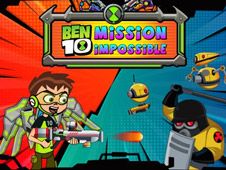 What is Ben 10 Mission Impossible?

Lately, we have been bringing you more and more new and awesome action games with Ben 10 online, after seeing how much you really love them, so we really could not miss the chance of sharing with you another game like that, which is why today you hop into action with this Cartoon Network hero by playing Ben 10 Mission Impossible online!

Ben does not have the Omnitrix on his hand today, so he can't use his alien-transforming powers to take out the bad guys, but to stop the destruction of the world, he has to infiltrate an enemy base and defeat the various villain scientists and robots in his path, for which he uses a special suit with a backpack and a gun that shoots electricity.

You have to move through the base using the W, A, S, D, with the W key you jump, and when you want to shoot electric beams out of your gun, press the spacebar. Eliminate the enemies in your path, but be careful so they don't hit or touch you too many times, or you lose the game and have to start all over again.

The more enemies you destroy, the bigger your score, and you should also try to make a big distance since that is also counted. Good luck, we wish you the best, and we want to see you here some more, as you keep having fun!