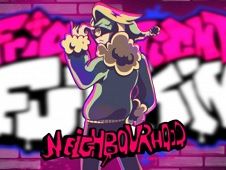 What is FNF vs Strange Neighbourhood?

Friday Night Funkin 'vs Strange Neighborhood is a pretty awful game in which you have to help Boyfriend dance as fast as possible on rap rhythms so that he manages to destroy his strange neighbor. The songs you will have to dance are 100% new, which makes us happy, because the developers of this mode have made a considerable effort to create this new design and also the new songs that you can try:

FNF vs Luxus and Aergie

The Dialogue with Luxus:

-So you are the little moron?

-My little brother told me about you, darling!

-You do music? Oh, I am the most famous popstar in this world, you must be super happy to see me!

This character is a feminine one, she is a middle-aged woman, with blond hair, long up to the ankles, and as clothing everything is quite brief, considering that she is in a bathing suit and heeled shoes.

-Stop Beepbooping! The whole neighbourhood is sick of you.

Use the arrows to help BF dancing!