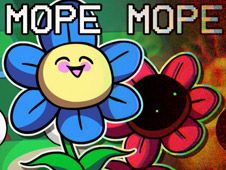 What is FNF vs Mope Mope?

Boyfriend and Girlfriend can't even spend some quality time in nature without someone challenging him to a rap battle, and to even more surprise, the antagonist that Boyfriend has to face off against is a flower called Mope Mope, but don't let yourself be fooled by its cuteness, since it has really good rapping skills!

Focus and show better rhythm than a flower, right now!

When you see the arrow symbols above BF matched with one another, at the same time you have to press the very same arrow keys in order to hit the notes of the songs correctly, according to the charts, but be careful not to miss doing that too many times in a row, since you will eventually lose if that happens.

Reach the end of the songs by pressing the keys and hitting the notes, and make sure that this is not the final game from this category you try out today since even more fun is coming up for you, believe us!