Over the Moon Jigsaw Puzzle

The Mitchells vs The Machines Jigsaw Puzzle 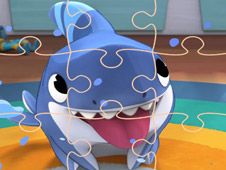 What is Sharkdog Jigsaw Puzzle?

Sharkdog is one of the latest animated television series to have started airing on Netflix, or, rather, to be streamed worldwide, and we've already got online games based on it to offer you here, with Sharkdog Jigsaw Puzzle.

Sharkdog follows the title character with the same name, who is a shark that behaves like a dog and can live both in the water and on land, and together with his owner, a boy named Max, and his human friends, have all sorts of awesome adventures, day after day!

Solve the puzzles with SharkDog and have tons of fun!

In total there will be twelve puzzles for you to solve, but only one is available from the start, so make sure to finish that one first, and when you are done completing it, a new one will unlock, and, so forth, something that you have to keep doing until they are all done with.

You pick the level of difficulty between easy, medium, and hard, with each one having a certain number of jigsaw pieces, and then the pieces are spread around the screen.

Pick them up with the mouse, and one piece after another, make sure to put them back together until you have a full image in front of you, simple as that. Enjoy, and have tons of fun!