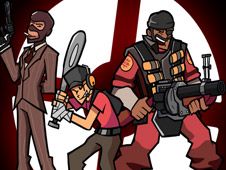 What is FNF: vs Team Fortress 2?

It's a great day now that Friday Night Funkin crosses over with Team Fortress 2, one of the most popular multiplayer games in the world, still to this day, as right now we are delighted to share with you all the awesome new game called FNF: vs Team Fortress 2, where you go up against characters such as Scout, Demoman, Sky, instead of just one character like in the previous FNF TF2 mod. For each of the three antagonists you've got a different song:

Defeat the TF2 gang with music, not weapons!

Whether you are playing in the story mode or free play mode, it does not matter, as you've got to give your best to reach the end of the songs in either of those, using the arrow keys by pressing the keys at the same time as the arrow symbols above BF match one another.

Keep at it until the end of the song, but be careful not to miss pressing the keys too many times in a row, since that will lead to you losing the whole game. Enjoy!