FNF VS Lucky from Animal Crossing

FNF vs Oswald the Lucky Rabbit 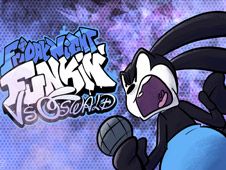 What is FNF vs Oswald the Lucky Rabbit?

Oswald the Lucky Rabbit is the latest cartoon character to have made his debut in our category of FNF Games online, and something tells us that you will have tons of fun going up against him in a rap battle, something that you will do on a song known as Rabbit Luck, which is extended if you play it in the hard mode!

Use skill, not luck, to win the rap battle!

To play notes of the song at the appropriate time, watch for when arrow symbols float and match above BF's head, and, at the same time, press the identical arrow key from your keyboard, so the note will be played.

Keep doing it until the song concludes in order to win, but know that if you miss pressing the keys too many times in a row, that leads to you losing and having to start again from scratch. Enjoy!