FNF vs Amazing World of Gumball 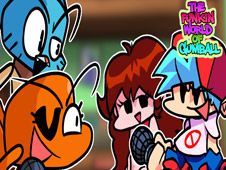 What is FNF vs Amazing World of Gumball V2?

Welcome to the FNF vs Amazing World of Gumball V2 mod that we've just now added, which is great if you weren't satisfied with the already full week mod that we have of Gumball from Cartoon Network, as this brings along even more songs than that one, which only had three:

Darwin joins as one of the antagonists, in the second week, and we also have some other versions of the title blue cat character we know you love so much.

Let's have an FNF battle vs Amazing World of Gumball!

Choose to battle these musical foes in either the story mode or free play mode, and, then, give it your best to reach the end of the songs by playing all their notes according to the charts to win. So, when you see arrow symbols matching above BF's head, press the identical arrow keys from the keyboard. Don't miss hitting the notes multiple times in a row, or you lose and have to start again from scratch. Enjoy!