FNF vs Kratos (God of War) 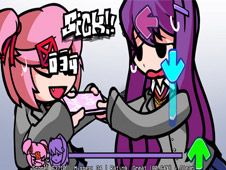 FNF: Natsuki & Yuri Sings Tug-o-War is a really awesome one-song mod from Friday Night Funkin' that features two anime girls fighting one another, and we are sure that you will love this plenty, just like you usually do with these amazing mods!

Let's sing Tug-o-War with Natsuki and Yuri in FNF!

As the song progresses, when you see arrow symbols match above your character's head, that is when you have to press the identical arrow keys, and if you keep doing it until the song's conclusion, you will win. Be careful not to miss hitting said notes too many times in a row, because you will lose. Good luck to you, we wish you all the best, as per usual!