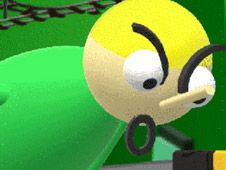 What is FNF vs Garrett Staredown!?

Let's have an FNF battle between Garrett and Gorbini (your character), both of which come from the world of Roblox Games, and you are going to have this intense battle between them on the song called 'stankeye'.

Use music to get rid of Garrett and his staredown!

As the song progresses, you see arrow symbols float and match above your character's head, a moment when you need to press the identical arrow keys from your keyboard, and that is how you hit your notes.

Hit the notes until the song's conclusion to win, but know that missing to hit the notes many times in a row will disqualify you and make you lose since you've messed up the chart too much. Good luck, the best we wish you all!