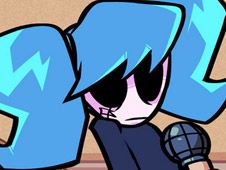 What is FNF vs Sal Fisher (Sally Face)?

Sal Fisher, a horrific character from Sally Face has now arrived in the world of FNF, and you need to defeat her right now on one song only, called 'nockfell'. Let's do it!

Hit play, and then keep hitting your notes until the end of the song to win, turning the progress bar towards you. So, when the arrow symbols match above BF's head, that is when you need to press the identical arrow keys to hit your notes. Be careful not to miss hitting said notes too many times in a row, you need to start again from scratch then. Enjoy!