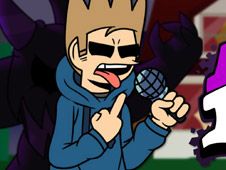 What is FNF Vs Tom: Legacy?

We bring you more new FNF x Eddsworld Games right now and here with the Vs Tom Legacy mod, where you and BF attempt to defeat this character once again, but this time in his monster form, since he now of how dangerous you are, and you are also going to do it on two songs:

Defeat Tom in his Legacy form, only in FNF!

After you've made your choice between the two modes, know that in either case, to win you have to do the same thing, which is playing your notes according to the charts until you reach their conclusion.

To do it, press arrow keys at the same time as the identical arrow symbols match above BF's head, without missing to hit them too many times in a row, because if that happens, you lose. Good luck and all the best we wish you, as always!