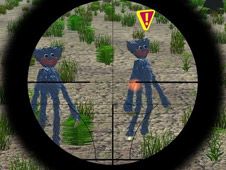 What is Squid Poppy Sniper?

Squid Poppy Sniper represents the ultimate crossover between Squid Game and Poppy Playtime, both really popular categories on our website all year long, which is why we are positive that many if not all of you will be very excited to play this shooting game 3d with snipers right now!

Snipe down the Poppy Playtime characters racing in Squid Game!

Huggy, but also Kissy Missy, Mommy Long Legs, and other characters from this series have entered the Squid Game's first challenge: Red Light, Green Light. During each time the red light is on, some of them will have moved on it, so it's your job as a sniper to shoot them down.

Use the mouse to aim and shoot your sniping rifle toward the creepy dolls, but be very careful to not shoot down those who do not have targets over them, or you lose. But, if you keep firing your guns correctly, you will be rewarded level after level, run after run. Let's start!