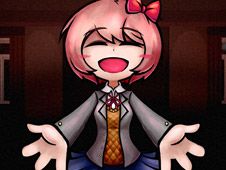 The FNF Sayorichrome mod, named after the song you will be singing, features you and BF going up against Sayori from DDLC, one of the most popular anime video games in the world, and since previous such crossovers had been received remarkably well, this one is not going to miss the pot either!

When you see the floating arrow symbols match above BF's head, to the right, that is when you will have to press the identical arrow keys at the same time, and keep on doing it until the end to win, while being careful not to miss too many notes in a row, that leads to you losing. Good luck, enjoy!