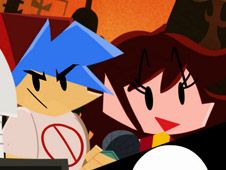 What is FNF VS Samurai Jack?

In our newest FNF VS Samurai Jack mod, BF, GF, and Jack team up to defeat some of his classic cartoon villains through the power of music and rhythm, something you're invited to do on the following songs:

Let's have an FNF fight vs Samurai Jack!

In either mode you will be playing, story or free play, the character to the right is the one you become, having to defeat the one on the left, doing so by reaching the end of the songs, which is done by playing their notes according to the charts.

So, when the floating arrow symbols match above that character, that is when you need to press the identical arrow keys. Be careful not to miss doing it too many times in a row, you will lose and have to start again from scratch. Good luck, enjoy!