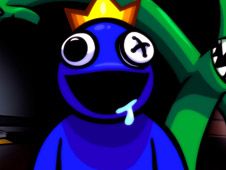 What is FNF Roblox Rainbow Friends vs Blue?

We've now dropped for you all the mod known as FNF Roblox Rainbow Friends, where Blue is going to be your newest antagonist coming from the popular multiplayer platform, who we invite you to challenge on the following songs:

Have fun with the Roblox Rainbow Friends such as Blue, now in FNF!

In either of the two modes you will play, you win in the same way, by reaching the end of the songs, which is done by hitting notes according to the charts until the song ends.

So, when you see floating arrow symbols match above BF's head, press the identical arrow keys to hit your notes. Make sure not to miss doing it multiple times in a row, that will lead to you losing. Good luck, enjoy!