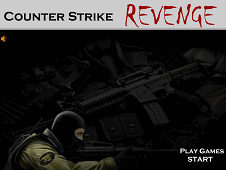 What is Counter Strike Revenge?

In this game you have to work very hard to defeat all enemies to each level. Although it seems a simple matter do not rush to judgment because the game is quite difficult and as you progress you will give higher levels of obstacles that will give you big headaches. Revenge that require police masked terrorists in the new version of Counter Strike Revenge is a new battle in which you will have to attend to which you will have to get involved as active and try to pass all the missions that you have and why not try to win over missions missions in the new children's games that will have to win increasingly quickly managed to get to the end of the mission because only in this way you'll be able to pass all these terrorist activities new games. Watch out the terrorists that come your way, try not to miss any shot for you because everyone will be booked well enough, you will get bonus points good for top final ranking you have children in the new game. If you fail the first try, you should not give up. The game is quite difficult so we have to try several times until you achieve the objective successfully and have the chance to become a top player.