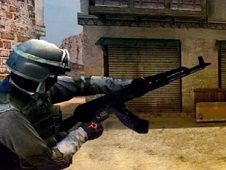 What is Forward Assault Strike?

Like any other day, here on play-games.com, you dear friends can see that we have brought for you a very interesting game for boys called Forward Assault Strike, in which dear friends you will be playing a brand new 3D Counter Strike online multiplayer game for kids and show that you are the best soldier of all times.

Today dear friends, you can see that we have brought for you a very special 3D shooting game for kids, in which you will have to be very fast, because dear friends, like in any other 3D Counter Strike multiplayer game that you can play online with other players around the world, you can see that it's not going to be easy at all to defeat your opponents and have the highest score. You can see that in this new challenge, you will have to be very fast and see how you can reach the end of the game with as many enemies shot as possible.

There will be two teams, the terrorists and the counter terrorists, and you dear friends will be placed in one of the teams, and you will have to use your A, S, W, D keys on the keyboard to move around the map and start searching for your opponents, which you will have to be very careful about, because they will do the same. Using your mouse, you will control all the 3D weapons that you can loot, buy or just find in your inventory, and once you mark a target, you will have to click your mouse and shoot your opponent before he does the same thing for you.

It's not going to be the easiest 3D multiplayer shooter games that you have ever played, because each and every one of the players are going to be very good and have good skills with their weapons, so you have to demonstrate that all the hours inside the Counter Strike game are not in veign, so you have to make sure that in the shortest time, you will be able to gain points and shoot as many opponents as possible, which will bring you points and even leadership of your team. Have fun!