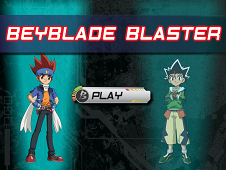 What is Beyblade Blaster?

Beyblade Blaster new mission is that we want to show it to you and also hope that you will love it as much as you liked and other metals invaders games. In the new game you will need to choose one beyblade color with which to fight, to get into the greatest wars and so you get to earn increasingly more far-reaching actions that will bring more beyblade thousands of different powers. Be as careful about attacking guns around you, trying to dodge the spinning top of all your opponents whom they have around you, and what is most important is to generate power increasingly larger to enable you ultimate force of destruction it's invading enemies. You can remotely control your beybladeul with a lever after you manage to throw it in the bayblader arena to you with all war opponents that you have in your way. Do not be intimidated by the large number of beybalders coming towards you, trying to fight them one by one and thus manage to create increasingly more bonus points to propel yourself atop beyblade players and she forwards represent.

Use the mouse to play the new game beiblei 2015 Beyblade Blaster.