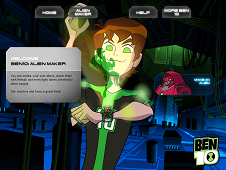 What is Alien Maker?

Ben 10 from Cartoon Network has always had the best aliens in children’s animated television, which is why the show had been such a success, and while there have been all sorts of aliens from the Omnitrix we encountered over the years, we’re sure that many of you are interested in creating your own aliens.

You can now do that, with the game called Alien Maker, which is just perfect for all the creative types out there who love character creation game. Instead of making a boring human, you get to create the aliens you have always had in your imagination. There are three overall types of alien you can choose from, so start there.

With the buttons to the left side of the screen, you will be able to change each part of the alien’s body, such as the torso, the arms, the legs, the head, the eyes, the mouth, you can add a different mask onto it, add wings or any other kinds of special limbs or body parts, such as a tail. For all these body parts, you can color them however you want, from the colors on the right.

Create the aliens that you like, and then save their picture and show it to friends, whom you should definitely invite over here so that they can also create their favorite aliens and be creative!

with the mouse you have to manage the new game with Ben Ten and aliens.