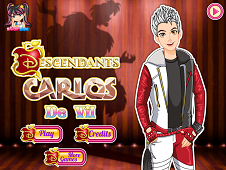 What is Descendants Carlos?

Carlos is one of the most handsome guys from the whole Disney Channel world and he is such a great animated character, from the most awesome TV animated series named Descendants! Carlos is the son of the awesome Cruella de Vil, one of the evilest character and villain from Disney world. She is so awesome but still bad and evil and her soon has totally get it from her mom because even if he is a pretty good guy, he has something bad inside him and you can see it in his eyes. He is kind of tough guy so right now, your mission is to adjust and to switch his clothing style in order to offer him something which fits perfectly with his personality, which is pretty much as his mother's! There is not going to be an easy mission so you have to have a lot of guts to accept it. Go for it right now and prove that there is no other better dress up designer and fashion creator than you so let's get this dress up adjustment started. Good luck in your try and have a lot of fun once again and do not stop until you finally make Carlos look more than perfect in his brand new clothes!