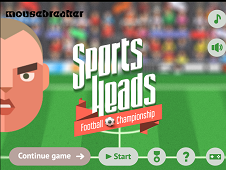 What is Sports Heads: Football Championship?

Football Championship is the latest game offered by the Sports Heads, this amazing and so awesome football game which challenges you to overcome your super talents when it comes to football and shooting and heading with the football players so make it happen right now and do not forget that you must be the best. Football is the king sport in the world so you have to be so creative in this game, while you are trying to defeat every single opponent which will stay between you and accomplishing your goal, which consists of winning the title of the Champion from this European Championship so you have to pick up a team, which was qualified to the final championship, UEFA EURO 2016. Pick up a team and then a player and start this game 1 vs 1 with your opponent and shoot and score more goal than your opponent, using the arrows to move and jump and the SPACE bar to shoot and score. Let's go for it right now and do not forget that you really must and have to be the best!

Use the arrows, SPACE bar