One Piece vs Naruto CR: Zoro 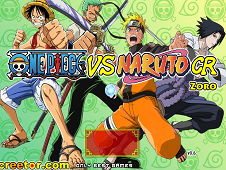 What is One Piece vs Naruto CR: Zoro?

One Piece vs Naruto CR: Zoro is such a great fighting game which brings you the occasion to use the arrows and some additional keys like U, I, J or K in order to roll your character in order to dodge and avoid the opponent's attacks and also to attack when it's your time. First of all, you really have to know that using these keys, which I've mentioned you before is going to be so important for you so get to the work right now and do not waste your precious time anymore, because it could get too late and you can be beaten by your opponent, it doesn't matter who he will be, he will definitely be strong because all these fighting characters from this special fighting world are so powerful. The whole action will happen in Naruto's kingdom so you have to pick up a player and then select another one if you select the 2 players mode and fight against each other or play against computer and make sure that you will hurt your opponent more than he hurts you. Learn the basic fighting moves and then learn some secret and special commands using the same keys so get to the work right now and have a lot of guts and fighting spirit. Good luck for the last time!