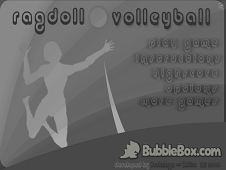 What is Ragdoll Volleyball?

Ragdoll Volleyball is such a great and so cool volleyball adventure and sport game, which allows to you the use the arrow keys in order to shoot those balls as far as it is possible from your side of the pitch. Not some real players, but some ragdolls which have the ability of jumping much higher than some humans so this is going to be maybe the extra point of them! Go for it right now and also show off, trying to become the greatest volleyball ever and have a single purpose, not letting the ball touch the ground in the side of the pitch which is yours. Also, you have to make sure that you will serve some impossible to be blocked shoots so chase aces! The fun aspect about this awesome game is that you do not have any touches limit, as in reality so you can touch your ball during it is in your possesion as many times as you want. Good luck in this incredible challenge and ragdoll volleyball mission and prove that you are the best volleyball player around here! Do not hesitate to jump higher and higher for proving your incredible volleyball abilities and skills!