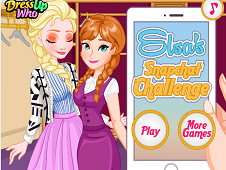 What is Elsa Snapchat Challenge?

Elsa and Anna are two of the most incredible and so well looking Disney princesses from the incredible animated world of Frozen, the Ice Kingdom also named Arendelle. The situation in this special game is so cool, because Elsa does really need your help but so does Anna so let's get to the work right now, dressing up each of them in a row. Elsa has launched this challenge so let's start it! Firstly, Elsa sent a snapchat with a special outfit to her beloved sister Anna. Anna has received it but you have to unlock her phone and of course, to find where the Snapchat icon is and select it. After selecting it, open the Snapchat app and see the photo in 10 seconds. Pay close attention during those 10 seconds and after this, try to remake the awesome outfit of Elsa, for Anna, her awesome sister. Pick up the clothes from the closets in the background of the game screen, where there will be so many clothes and when you make the wrong choice, selecting a wrong dress up articles, the game instantly stops and you have to restart it from the noughts! Good luck and focus on earning so many points!