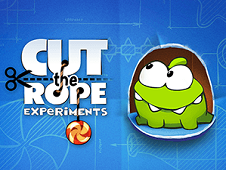 What is Cut The Rope: Experiments?

Cut The Rope series has just brought another special adventure with our favourite little character, green colored, Om Nom. He really wants to eat something, as usual in the Cut The Rope series so let's get to the work right now, feeding the little monster as soon as it is possible, with candies and everything. The goal is to keep Om Nom fed up, but it won't be actually enough for you to complete each task, because at some point, you reach at some point where there are required the stars collected from each level, so this is a sign of accuracy. Prove that you are accurate enough and you can also collect all the candies from each level, in the shortest time, by cutting off the rope in strategically ways, catching the bubbles which may float with the candy in the air, collecting the stars from the top side of the game. Good luck once again and also, there are another facilities for you to use for collecting the stars so let's get to the work right now! The ropes won't give off unless you cut them by dragging with the mouse the line you want to cut the rope with, on the rope's surface!