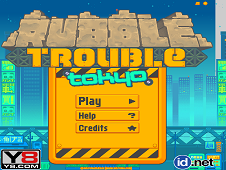 What is Rubble Trouble Tokyo?

Can you remember the last time you've tried this kind of special adventure, it was not long ago, in such a great rubble trouble wrecking and destroying challenge, in the middle of New York City, one of the greatest cities in the world. After your adventure there, a kind of company from Japan, Tokyo more exactly, has hired you to destroy and wreck their buildings, the old ones and out of the use. In this fantastic and so cool task, the goal is the same as in the previous one, but you have new kind of toys and tools for you to use, for destroying every single necessary buildings from the whole building complex. In every single level, there is an amount of tools and explosive stuff for you to use so make sure that you won't blow it and you'll never run out of projectiles or bullets to shoot. It is so important to never give up so shoot until you aim and destroy. There are new achievements in the shop, after accomplishing some levels, like some huge dinosaur robots or helicopters and destroying and wrecking stuff like this, which could be used by you to destroy the huge buildings!