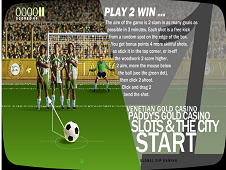 Play 2 Win is the goal in this super soccer adventure, where you do not have to play a minute of real soccer, but actually to score from free kicks as many goals as it is possible, fooling the goalkeeper and the wall made of players from the opponent team, continuously, as often as you can for three minutes, because this is the length of a level in this special shooting at goal game. In the very first level of this special game, there will be the ball, in different positions, but at the same distance from the goal. The wall of players has the same amount of players all the time, during the three minutes from the first level so in the three minutes available for you, shoot as many times as it is possible but not just shoot, but even score! In the bottom side of the game screen, where there will be the ball, you need to spot the mouse there, next to the ball and this way, there will appear an arrow which indicates to you permanently the trajectory of the ball so make sure that you will shoot it rightly, judging by the chosen trajectory by you. Good luck and pay attention to the details, playing only to win, as the title of this game suggests to you!