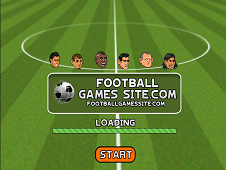 What is Big Head Football ?

Big Head Football is such a great football or soccer adventure, where you have to beat your opponent, it doesn't matter the score but the goal is to score more than him in the amount of time allowed to you, which is a couple of minutes. The stadium is full of with so many fans, you simply can't make a mistake and lose, because with their support, everybody becomes invincible. Let's make it happen right now and the players have big head, and only some football boots. Use the arrow keys in order to move and to jump if it is necessary for you and of course, the SPACE bar in order to shoot that ball, right to the goal of your opponent but it is important to get the ball in the goal, not only shooting it like this. Go for it right now and become a real master in this awesome challenge, with those Big Heads players. There are your favourite players in the world, so just check the list of players right before starting the game. Good luck and let's make it happen right now, trying to become a real football legend in this spectacular task. Play in two players, asking a friend to play with you if you want and the competition will be even hotter than it was!