Story of a Pawn 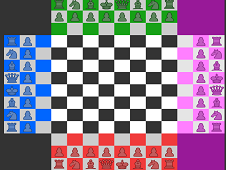 Chesss is such a great and so cool multiplayer game, which is about playing chess if you haven't figure out yet about the purpose of this game. It is so simple apparently, but the main mission is pretty complicated so that's why you have to take caution and make sure that you'll finally be the best chess player in the whole game, so let's start as soon as it is possible. This game could easily be played in two, three or even more players so pick up the number of players you wanna play against and ask a friend or even more, to play this game with you. The controls are simple so you only have to use the mouse for moving every single chess puzzle, in any direction possible. What do you think about it? However, let's start this challenge right now, making sure that there is no other better chess player than you. Some chess pieces, are arranged in four different sides of the game screen so use the mouse, when it's your turn, to select a piece and move it and then wait for the other opponent to move too. Avoid getting your pieces smashed by the opponent's ones but now, you don't have to avoid only one player, but three more!