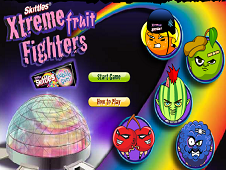 What is Xtreme Fruit Fighters ?

Xtreme Fruit Fighters is such a great and so cool fighting game, which offers to you the occasion to use the Z or X keys and even the C key, in order to attack the opponents who are trying to destroy you in this superb fighting challenge. The goal is to use the arrow keys in order to move and wander there, all over the game screen and of course, you need to use the keys mentioned above, in order to hit the opponents, destroying them one by one. Good luck in this impressive task and first of all, select the player you wanna fight with. There are a couple of fighters, all of them bad fruits characters, who really want you to fight them with or against. After this, select your opponent and start a practice match. Beat them with your better developed fighting strategy, the movement during the fight and the stronger hits and qualify in the elimination stages of the championship and only stop in the final, after you will have won it. Good luck and try to reach the top of the fighters, unlocking new fighters all the time, by winning so many points and gathering up a couple of coins!