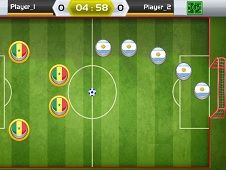 Depending on how you want to play, you can combine the three-game modes so that you can compete with your opponent in all modes.
For a start, you will be able to choose the country you want to represent, and here we have almost all countries on all continents, regardless of whether we are talking about Russia, the USA, Europe or Asia. Obviously, depending on the team you choose to represent, the technical characteristics (power, time, aim) will differ from team to team.

At the same time, you can also change the terrain you play on, namely a summer field with grass and sun or a winter field with snow and ice, where the football boards will slide faster and easier on that surface. The duration of the game may differ from 3.5 or even 8 minutes, and it is very important because what differentiates the winner of the match from the loser is the number of goals scored in the opponent's gate. The Finger Soccer 2020 game is a minimalist football game that is played according to the classic rules of real football, but instead of footballers, we will have on the field circles that we will have to shoot to move them.

You can throw one circle into the other to curl up and thus earn bonus points for reaching all your teammates, or you can directly shoot at the gate and win. If you chose to play in 2 player mode, you will need to know that the game is played with the mouse, and each team has the right to 30 seconds to use this instrument, after which time expires and the mouse will control the other team. Right from the start, you will be able to pretend that you are a true coach because you will have to choose from 5 ways to put your players on the field.