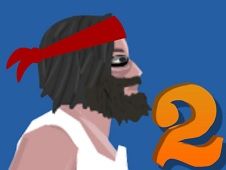 What is Short Life 2?

Short Life II is a game eagerly awaited by Play-Games.com players in which you will have to continue the adventure that you know for sure from the first level of the game Short Life 1 in which you became friends with a bearded man, the red banner on his head, and which he had to coordinate through the countless missions he had.

Although it sounds classic, the second part of the game Short Life is the same, but this time the creator of the game Gametornado created the special game for children who played the first part of the game, and this time your missions will be more and more difficult. . Unfortunately, the blood, the dislocation of weapons or legs, the explosion of the body or even the death of the main character will not disappear from the new mission you have, so you will have to be very careful about all the obstacles you have in your way.

The Short Life 2 game has a total of 20 different levels, which you can play only if you start with the first, which is unlocked, after which you can continue with the second, and so on.

The second level will start with a large yellow crane, which has a bucket full of spears on top and will start moving from left to right as you approach it. The only viable solution to get past this crane is to kneel and walk on your stomach under the bucket full of spikes; after you have finished this challenge, you will have to advance until you meet a huge hammer that moves vertically, take care not to crush you, and the next attempt will be to jump over a catapult that tries to catch you in its spears.

use the arrows to move and SPACE to jump.