Lets Create with Tom and Jerry

Tom and Jerry The Duel 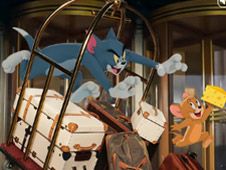 What is Tom and Jerry The Duel?

Not too long ago, both in cinemas and through video-on-demand you could watch the newest addition to the Tom & Jerry franchise, and that was Tom and Jerry: The Movie, a film that combines live-action actors and sequences with CGI-generated and animated characters such as Tom, Jerry, Spike, and all the other ones you love so much, and now you can play games based around this movie here, starting off with The Duel!

A hotel duel between Tom and Jerry

The two characters are living in a hotel in this movie, and despite the fact that it is always crowded, the two still go at it with their cat and mouse chases, and this time they are once again facing against one another, and you join too.

It's like a bejeweled puzzle game where you have to find groups of multiple blocks in the same color, and when you do, tap on them to have them eliminated, earning points the more blocks you clear out in one go.

If trap buttons appear, tap on them to set traps for your opponent, but make sure not to get caught in one yourself. As the two are dueling, the destruction meter rises, so get it to become full in order to wreck the hotel in pieces, and win.

Good luck, and don't hesitate to tell your friends they can play Tom and Jerry Movie Games here, since they might be eager to do so!