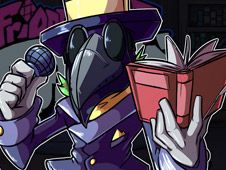 What is Friday Night Funkin VS Dr. Springheel?

We hope you didn't think we were done for the day with bringing you new FNF mods online of the highest quality, because right at this moment we've got a brand new one in store for you, the awesome new game called Friday Night Funkin VS Dr. Springheel, which we hope you will not miss out on for the world, or you would only miss out on lots of fun!

Dr. Springheel looks just like a plague doctor from the medieval times when the plague was around, with that huge mask that has a beak on it, and because he thirsts for love and wants to know all about it, he consults with the Boyfriend and the Girlfriend about it, through a rhythm battle, after which he becomes angry and delirious, and tries to steal their hearts, so help our protagonist win! Sinusrhythm, Heartthrob, and Dysrhythmia are the names of the three songs featured here.

How to play and win the VS Dr. Springheel mod:

When the arrows over BF's head are matching with one another, you have to press the same arrow key on the keyboard, in order to get all the notes of the songs at the right time, which means that if you miss multiple notes in a row, you will ruin the song and lose, so don't let that happen for anything in the world!