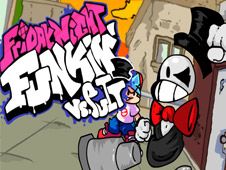 What is Friday Night Funkin vs Suit?

We really love it when modders create their own characters and insert themselves into the mod as antagonists since that always means that they have put a lot of hard work in order to represent themselves properly, and these mods have always been really fun, with this newest one prepared for you right now being called Friday Night Funkin vs Suit!

Meet Suit from FNF, and learn how to win the rhythm battle against him!

Suit, just like his name suggests, is a funny robot who wears an elegant suit, complete with a bow tie and a top hat, and because he loves music, he now faces Boyfriend in a rhythm battle, something that you will do on the original songs called Sunset, Ai-Ally, Vibing, Los-Pitidos, and Forever.

In a rhythm battle like this one, you have to hit all the notes of the songs at the right time, something that you do by pressing arrow keys on your keyboard. When arrows match above Boyfriend's head, press the same arrow on your keyboard, and none other, and if the timing right, you continue all the way to the end of the song.

Be careful not to be too late or too early in hitting the notes, or you lose and have to start all over again from scratch, if you miss too many times in a row! Good luck!