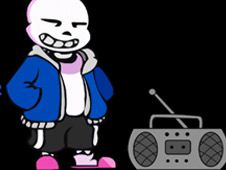 What is Friday Night Funkin vs Lazybones?

Crossovers between Friday Night Funkin and Undertale Games online had been received very well so far on our website, so there's no doubt at all that the same is going to be true right now and here, when our administrative team invites everyone to check out Friday Night Funkin vs Lazybones, a brand new game in this series, only for you!

Have fun defeating a new skeleton in a rhythm battle, right now!

While most of the skeletons we've seen before from this series are either scary or threatening, Lazybones is one of the most chill ones out there, a skeleton dressed up in casual leisure clothing, who is always having a smile on his face. He hails from the town of Snowdin, which is where Boyfriend went for a visit, so now they will battle it out in a rhythm duel on the songs called

You need to reach the end of each song and make the progress bar green in order to win. You will use the arrow keys for singing the notes, having to press the same ones as the ones matching above BF's head.

Be very careful not to press keys at the wrong time, or press wrong keys, since doing that mistake too many times in a row will end up with you losing the game!