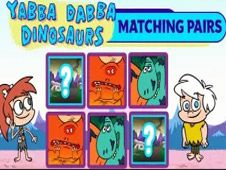 Fans of The Flintstones are very happy to see that on Boomerang Channels all over the world they can watch a brand new series set in that universe, a series called Yabba Dabba Dinosaurs, which focuses more on the kids of the family, instead of the adults that were at the center of the original series, and now you can play games based on this series on our website, starting with a Matching Pairs game where your memory skills will be improved upon in a fun matter!

Match the Yabba Dabba Dinosaur cards and clear them from the screen!

Start off by picking between the four levels of difficulty available in the game, each of them presenting you with a different number of cards for you to match. They are Easy, Medium, Hard, and Very Hard, with our team recommending that you start off with the first one and continue until you tackle and clear all four of them!

Tap on two cards in a row to turn them around, and when the two cards you have selected have the same image on them, they get removed, so do that until you've removed all the cards. In each level you are being timed, so try your best to clear all the levels as fast as possible. Enjoy!