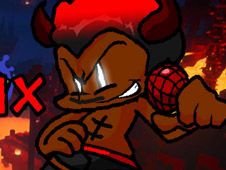 What is Friday Night Funkin Vs Lil Nas X?

Lil Nas X, in his new devil form, is the newest antagonist that you get to face off against in our category of FNF Games online, clearly one of the most beloved categories of the moment, with that being one of the main reasons that new games are being brought over in it as often as they are.

This game has no original custom songs, but it features an FNF design of LNX in the Week 3 level, and you can also go up against him in the Free Play mode, so he is replacing Pico.

Is Boyfriend a better rapper than Lil Nas X? Let's find out!

Even if he isn't, you have to make him one, as in this game you try to beat LNX together with Boyfriend, so do that by reaching the end of the songs and turning the progress bar in your favor.

To achieve that you need to rap all the lyrics correctly, and that is done by pressing arrow keys at the same moment that the matching arrow symbols match above BF's head.

Be very careful not to allow BF to miss too many of the notes one after another because if that happens, you eventually lose and have to start again from scratch. Good luck, and enjoy!