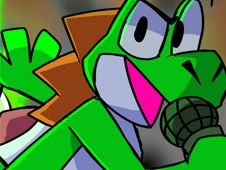 What is Friday Night Funkin vs Yoshi?

Crossovers between FNF Games and Mario Games added so far on our website had been received very well by our visitors, so of course, we would be glad that right at this moment we can bring you yet another new and awesome game like that, a game called Friday Night Funkin vs Yoshi, where Boyfriend is having a musical battle against this green dinosaur that Mario rides on sometimes since he can fly.

This game features three custom songs just for your battle against Yoshi:

Boyfriend Vs Yoshi, a rhythm battle like no other!

Boyfriend needs your help to win this duel, so help him with that in either the story mode or the free play mode, and to win you have to reach the end of the songs with the progress bar in your favor, simple as that.

To achieve that you need to have a good rhythm and play the notes of the songs at the right times, so when you see the arrow symbols above BF are matching, press the same arrow key on your keyboard to hit that note.

Be careful not to miss pressing too many of the arrows one after another, because if that happens you lose and have to start all over again from scratch. Good luck!