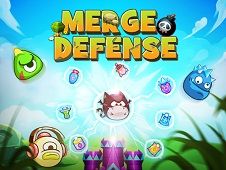 What is Merge Defense?

Defense games are the most played strategy games in which you will have to prove us that you are able to build the right strategy so that you can resist the attacks of enemies that come non-stop.

In the beginning, you will have to use the resources you have to plant a few cannons (more precisely three) so as to defend yourself from the monsters coming towards you. After you have managed to defeat the first enemies you will have a sum of money that you can use to upgrade the cannons you have already built or you can build other more developed defense systems to be prepared for larger attacks. In the game, you will have all kinds of bonuses that you can use to slow down the speed with which monsters move through the maze or to double the speed with which cannons shoot at monsters. When the monsters start invading you will be able to resort to special attacks that will be on the whole screen.

What's the secret to winning a defense game?

In order to win such a mission or even a whole war, you will have to pay close attention to the money you manage to save from the game and the speed with which you manage to develop your base, upgrade your weapons and also manage to see the war in the future so you can anticipate the best places to plant your weapons. For example, if you plant your shotguns in the corner of the maze, you will notice that this way you can destroy more enemies for the simple fact that you can shoot for enemies from two different sides of the maze.