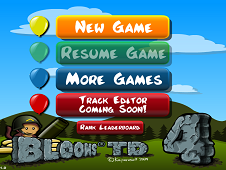 What is Bloons Tower Defense 4?

Bloons Defense is a tower defense game that has an interesting theme. Instead of killing monsters or aliens with big robotic towers, you’re using monkeys to pop balloons. Bloons Tower Defense 4 is part of a big list of fun and exciting tower defense games you can play for free online.

Bloons Tower Defense has a lot of potential as a tower defense game. There are premium tracks you can use that look more exciting, but don’t worry about trying to unlock those now. If you click “info” on the premium tracks, then you can preview them to see if they’re worth purchasing.

Choose any of the available maps you want, then choose which difficulty you want to play:

When you start the game, you’ll see your money and lives at the top right. On the right side of the screen are the monkeys you can assign to defend the route. The first monkey you get is the “Dart Monkey”

The Dart Monkey is the basic monkey that can pop a single balloon. While this sounds like all you need, once you become overwhelmed by Bloons, the Dart Monkey can only handle so much.

Play around with the different monkeys and setups you can do once you progress through the game. Don’t forget that each monkey is upgradable. For example, the Dart Monkey can convert to a Spike-O-Pult with a level 4 upgrade, greatly increasing its effectiveness against the invading Bloons.

As you level up in rank, you unlock more weapons you can use against the Bloon horde. For example, once you hit Rank 2, you unlock the Tack Shooter. The Tack Shooter shoots a volley of tacks in 8 directions. It is excellent for thinning out waves of Bloons. Best placed at the corners or intersections.

Now that you’re familiar with the gameplay for Bloons Tower Defense 4, it’s time to follow some tips.

●    Don’t worry too much about setting everything up before you start. Sometimes you want to see just how things are going to play out before you strategize. Don’t stress too much about strategizing ahead of time.
●    Don’t use all of your money right away. Use less money by spreading tower monkeys out at first. It’s tempting to want to put all of the monkeys at the front, but what if one balloon slips by? There’s nothing in the middle or the back end to pop the balloons.
●    Each weapon you use against a Bloon has optimal placement. Read the tooltips for each weapon to learn the best location.