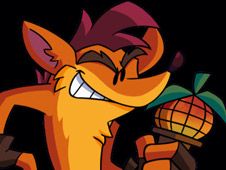 What is FNF vs Crash Bandicoot?

Crash Bandicoot is a really popular video game character, and he has now encountered the master of rhythm, Boyfriend, so the two of them are battling it out in a rhythm battle for the awesome new Friday Night Funkin mod called FNF vs Crash Bandicoot, which we have loved a lot, so why would the same not be true for you too?

When you see that arrow symbols above BF's head are matching with one another, at that time you have to press the very same arrow keys, and you have to keep doing it until the end of the song to win. When you see the progress bar has tilted towards you, you've won.

Be careful about missing to press the keys too many times in a row, because if that happens, you will lose, and Crash is going to win, and we hope you won't allow that to happen!