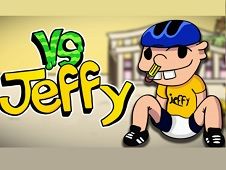 What is FNF vs Jeffy?

FNF vs Jeffy is a new mod created by Carrmay, in which you will meet a rather controversial character. A pretty young kid who seems a bit stupid, with a pencil in his nose, and always puts it between his legs and then in his nose, which makes it quite funny. Even if the new character seems a bit stupid, you will not have to underestimate him, because you will notice that during the three songs he will become better and better, being a formidable rival.

How can you beat Jeffy from Friday Night Funkin '?

In order to beat him, you will have to use the experience you have from others mods. The moment you manage to hit the arrow after the arrow you will accumulate more and more bonus points that will eventually bring you the long-awaited victory. Each arrow you press wrong will bring a point to Jeffy. Jeffy's physical appearance is quite light, with a blue hat on his head, a yellow T-shirt with his name on it, and a pair of shorts over which he pulled off his white panties. Obviously, the strangest thing is the yellow pencil that is stuck in your nose.

Use the arrows to start the buel.